Paintings and paper works by Zoran Music in Ljubljana / Ljubljana 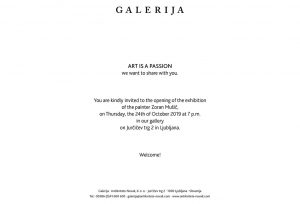 In addition to landscape depictions of Dalmatia, Tuscany and Umbria, portraits and genre scenes of farmers and fishermen, as well as cityscapes from Paris and Venice are on display. Also on show are paintings from his Cavallini series, in which the horse paintings became a symbol of freedom and humanity, as well as works of his series “We are not the last”, written in the 1970s.

On the occasion of this exhibition the gallery MAGNET will present a comprehensive book documentation about Zoran Music with texts by Peter Handke, collector and music expert, Siegbert Metelko and the art curators Ivan Ristic and Natasa Ivanovic.

…. ……………. Like few other artists, Music, through its life and its art, unites the qualities of the Adriatic Alpine region, whose fate today moves all hearts. Born in Gorizia before the First World War and raised in the area around Trieste, moved to Styria and Carinthia at a young age, then educated at the Academy in Zagreb, from where he visited Vienna and Prague, and finally in Venice only as an artist Potency recognized, he is a child of our space. The motifs of Veneto and Dalmatia’s art territory and the aesthetics of the Byzantine tradition of these eastern territories formed the basis of his art. From there his interest extended to Madrid and finally to Paris, which he chose as the main residence next to Venice after the Second World War. From the Central European he became a European and developed his strongest forces in the polarity of Western and Eastern Europe.

In the middle of his life he was also drawn into the horrors of our European destiny. In 1944 he was captured by the SS and deported as an alleged collaborator of the resistance to Dachau. The beauty and horror of our time he has experienced and connected with the depths of our past, the rural traditions of Dalmatia and the splendor and elegance of old Venice and the cosiness of the old Austrian area. From this, Music’s art draws its peculiarity and can help us in our time of turmoil and fragmentation to recognize what should deeply hold together this southeastern part of ancient Central Europe, a deep, humane culture and sensitivity that connects man and nature. ……….

Siegbert Metelko (from the catalog ALBERTINA 1992/93)

TV contribution to the opening of the exhibition

Translator Excerpt from an article by the largest Slovenian newspaper “delo” on this exhibition:

Galerie Magnet has accompanied the exhibition with an extensive four-language catalog, “Zoran Mušič – The Fascination of Painting”, edited by Wilfried Magnet and Siegbert Metelko, who was a friend and close companion of the artist for more than two decades. The text for the catalog with more than 150 illustrations is by Siegbert Metelko, Peter Handke, Ivan Ristić and Nataša Ivanović. In Handke’s birthplace Griffen, the Mušič family spent a year, until it was expelled by the Austrian nationalists after the referendum of 1920. Peter Handke and Mušič got to know each other in Venice: “One day I was in the studio of the artist, in the Zattere district in Venice, opposite the bar, where I often sat, many years ago, in the evenings after work on my Film script Wrong movement … So I close my eyes again and listen to Zoran Music tell how his father, the Slovene, shortly after the First World War and the fall of the Austro-Hungarian Empire, teacher in the small Carinthian town, near the Yugoslav border where I was born twenty years later. ”

Metelko, otherwise collector and music expert, offers isolated insights into the artist’s biography and describes how Mušič was arrested in 1944 by the Gestapo in Venice, from where she deported him first to the Rižarna concentration camp in Trieste and then to Dachau. He also recalls Mušič’s friendship with François Mitterrand, who both had a similar view of history, politics and art (the French President awarded him the Knight of the Legion of Honor award). ”

>>To the original article